4 beers from Granada if you seek refuge from blah lagers 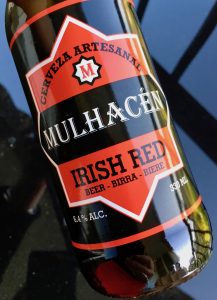 Food festivals are a sport unto themselves and I attack them with all the zeal of a cub reporter with the hope of someday touching the brilliance of Jonathan Gold or Frank Bruni. Until then, I write what I like and, up to today, I was an IPA girl living in a pale lager world here in Spain. That changed at the Granada Beer Festival, which opened its doors to artisanal brewers from around Spain and beyond. 26 breweries showed up to influence Spanish beer tastes with red and brown ales, stouts, wheat beers, and (hurrah!) IPA’s.

I sought out beers brewed in Granada for a couple reasons: the first being that brewery visits with safe bike parking might be a reality (they are)*, and the second reason was availability — what’s the point of finding a beer that you like if you can’t then enjoy it the rest of the year? I tried six beers in all, mostly in the amber category, but finished strong with a whisky-infused stout for contrast. Here I’ll list the four beers I tried along with a map that shows the location of each brewery plus where you can buy them in Granada.

Amber Pale Ale, 5.3% alcohol, Puchero Cervega, Monachil. I empathize with the risk that brewers are taking on crafting stronger-tasting beers, especially since the culture for anything but pale lagers hasn’t existed until recently. The Amber Pale Ale from the Puchero Cervega brewery cautiously breaks free of Spanish beer norms while still playing it a bit safe with this flavorful, light-tasting ale. https://www.facebook.com/pucherocervega/ 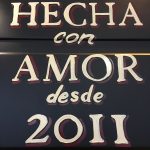 Portolobo Brown, 6% alcohol, Portolobo, Huétor Santillán, one notable aspect of Spain’s emerging craft beer culture is that, due to its newness, beers that may be standard elsewhere are a bit more sensational here. If beer can be regarded as comfort food, then the Portolobo Brown was like reconnecting with a friend I met years ago. Sipping the Brown was a homecoming of sorts, one that conjured up every happy memory of every brown ale I’ve ever tasted. https://www.facebook.com/Portolobo-1645147162426245/

Irish Red, 6.4% alcohol, Cervezas Mulhacén, Nigüelas, Named after Boabdil’s tyrannical father, Mulhacén, the namesake brewery’s beer is anything but harsh. The Irish Red may be suggestive of the bittersweet love the king had for his soft-hearted son, who ultimately conceded the kingdom to the Catholic monarchs, Isabel and Ferdinand, because the ale both commands and trains the tastebuds all at once with toasty provocation mediated by ambrosial teasing. I bought a couple bottles to take home and will likely be revisiting this beer often. http://www.cervezasmulhacen.com/ 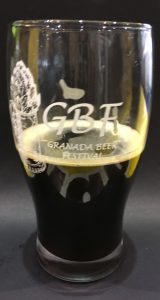 La Sangre de Mammooth whisky-infused stout, 18% alcohol, Cervezas Mammooth, Padul. A pioneer in the art of microbrewing in Granada, Cervezas Mammooth also deserves special recognition for being an early-adopter of the bond between beer and biking when the brewery sponsored the inaugural edition of La Mamut marathon mtb race in 2013. I hadn’t tried Mammooth since then and, given the growth in microbrews, I felt it was time to return. Mammooth would be my last stop of the day and I wanted try something that would mark a difference from the hoppy, toasty, nutty beers that I had tasted so far. The featured “La Sangre de Mammooth” whisky-infused stout was new to me — and to everyone else since master brewer, Juan Martín, had made it just for the festival. The whisky almost completely overpowered the stout, but the blend wasn’t the point. Juan told me that the Liber Distillery was next door to Mammooth and he wanted to try combining beer and whisky. I admire that sort of trailblazing, which seems characteristic of Mammooth since its product line has quintupled since 2013. I picked up a couple Victoria Secret IPA’s to go for a more routine tasting later on. http://www.cervezasmammooth.es/

*You’ll need to call ahead to arrange a visit to each of these breweries. No problem to bring your bike inside for security.

Brewery locations (where to buy beer from Granada is marked with