September 2022 – As we ease back into traveling like we once did, we hope this blog will inspire you to plan a trip to Granada, Spain in 2023. – Wendy

Granada is home to “El pico de Veleta,” Europe’s highest cyclable climb, which soars up to 3,394 m (11,135 ft). There’s more variety of riding in Granada than anywhere else in Spain, which is why the pros in-the-know can be spotted riding here all year-round. Veleta is a regular entry on lists of superlative bike climbs like “world’s highest/toughest/hardest” and Veleta more than deserves the distinctions. But Veleta has a few things that the others don’t, which makes it even more inviting. It is the second highest peak on the Iberian Peninsula and is overshadowed only by Mulhacén, 3,479 m (11,413 ft), its neighbor directly to the east. Unlike Mulhacén however, you can ride your gravel or road bike (with 28+ mm tires) to within 25 m (82 ft) of the peak. This makes it the highest cyclable climb in Europe. If you time your climb to a summertime full moon, you should aim to reach the peak at sunrise for an experience that’s hard to match anywhere else.

image courtesy of Granada’s Provincial Board of Tourism

To get the most out of this nighttime ride, plan your climb for June 4, July 3, or August 1, 2023. Those are the dates for the full moons next summer. If there are no clouds, you can ride up Veleta without turning on your lights. In addition to front and rear lights, bring a thermal longsleeved shirt, a wind jacket, and tights or leg warmers for the ride down. Bring plenty of water and food because there’s not much available once you pass the 1700 meter mark (but nothing’s open at night so either way, bring supplies!)

Go on a supported ride up Europe’s highest cyclable climb, organized by Granabike

Our first moonlight ride up Veleta in 2012 was organized and supported by local club, Granabike. The club has since made it an annual, fully-supported event with support and SAG and if there is to be a 2023 edition, info will probably be published on the club website. 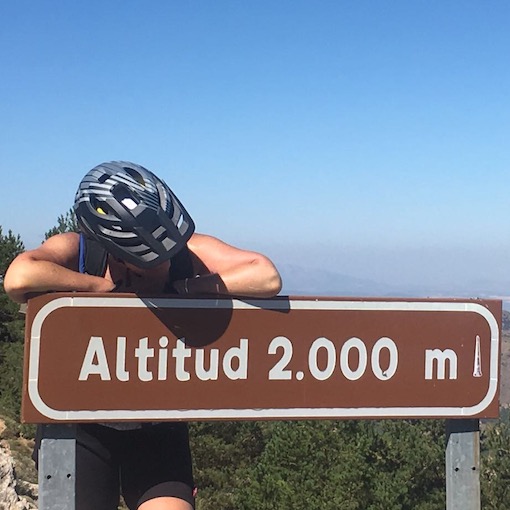 We try to ride Veleta at least once per year for a variety of reasons. Mainly we ride Veleta to prove we can still do it, we also want to remind ourselves  of why we chose to live here, and we want to suffer a bit. These are probably good reasons for you to do it too. Drop us an email if you have questions or need more information about riding up Veleta.

The red route marked on the map is our actual ride and it took us up to the peak and over to the other side of the Sierra Nevadas. We spent the night in Capileira before heading home the next day (optional). I added both the yellow off-road route and purple road route to provide some alternative options. While we chose to ride our dual-suspension mountain bikes up and over Veleta, someone fitter and faster could do it with a gravel bike with some front suspension. We locked out our suspension for most of the climb but a little suspension helped reduce fatigue and maintain focus on the descent, which is loose and rocky singletrack for the first 10-15 km. We each hauled a couple liters of water and lots of food in addition to a change of clothes, flip-flops, toothbrush, toothpaste and shampoo because resources are scarce from around 1,700 m on up. July and August are usually the best months to do this because if you go any sooner, you may run into snow around 2800 meters. If you go any later, it’s pretty cold above 2500 m.
GPX FileOff-road (yellow) GPX FileRoad (purple) GPX File