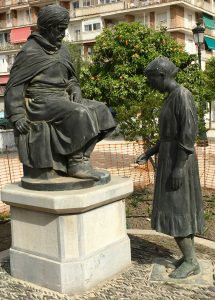 Boabdil and his wife, Morayma 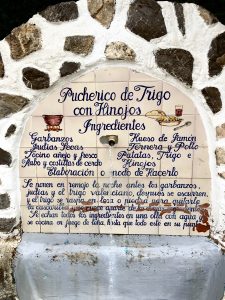 Gravel riding is new here but we think it has potential. Somewhere it was published that Spain counts 9,200km/ 5,717 mi. of dirt roads criss-crossing the peninsula, which doesn’t seem hard to believe, given the seemingly endless dirt roads that sketch passages between the mountains and valleys here in Granada.

This ride traces the retreat of Boabdil, the last Moorish king of Granada, after he relinquished the kingdom to the Catholic monarchs, Ferdinand and Isabel, in 1492. According to Washington Irving’s retelling, Boabdil left the Alahambra via the Tower of the Seven Floors and descended a “rugged ravine beset by thickets of aloes and Indian figs,” which is now a cascade of long, broad steps leading to the Realejo. From there he travelled south to the notorious (but remarkably underwhelming, IMHO) “Hill of Tears” or the last breath of the Moor, where his mother famously rebuked him for crying over the loss of the kingdom. Here’s where I abandoned Boabdil’s route to return to Granada.

I took a few creative liberties to both lengthen the ride and add more riding off-road. I confess that there’s more asphalt involved than I’d like but we’re still sorting out how to navigate off-road the necklace of towns that circle the base of the Sierra Nevadas on the west side. We’ll publish updates once we get that sorted.

Ride notes: In keeping with Boabdil’s documented retreat, the ride passes by the Tower of the Seven Floors, which was his final exit from the Alhambra, and descends some stairs into Realejo. You can skip the stairs and descend the same way as you climbed to reach the Alhambra, then take a right at the bottom to pick up the route again. • The route passes through the Montevives mine, which was totally vacant when I rode through. However, warning signs prohibiting entry plus the surrounding stillness made it a bit ominous. I plan to go back and redo this part with an alternate route.