How to “visit” the Alhambra without tickets 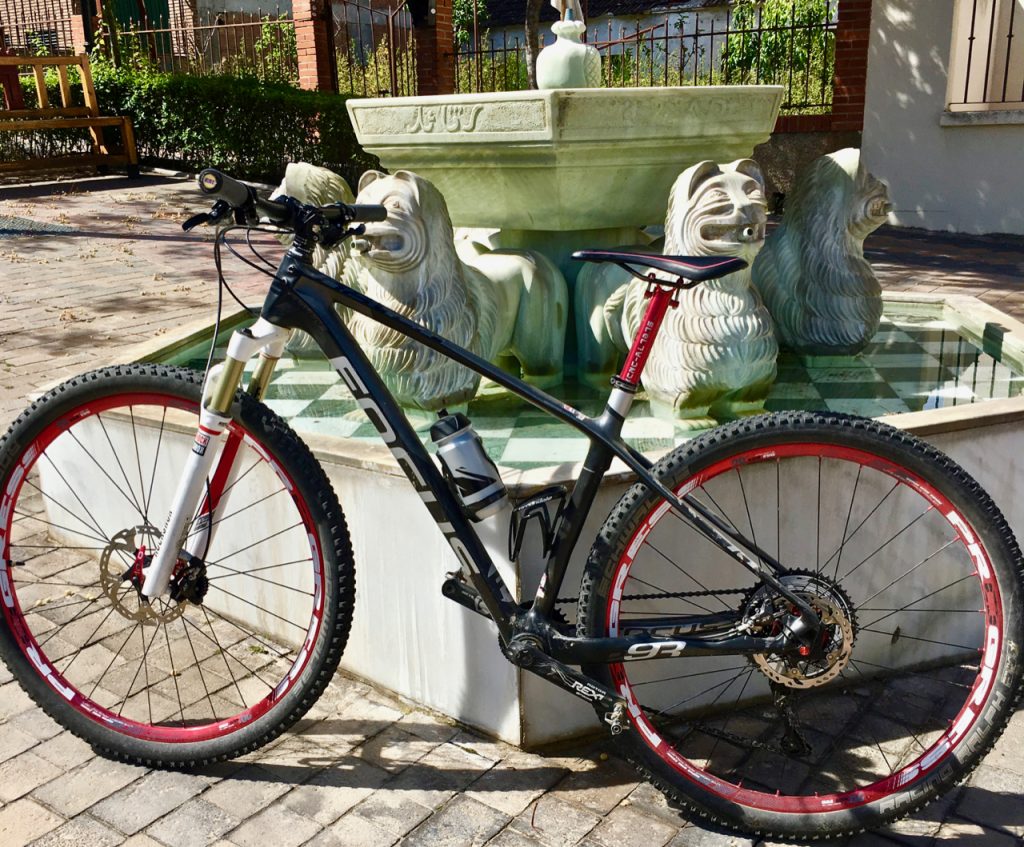 Tickets to the Alhambra can be tough – if not impossible – to find during peak times or at the last minute. As the most-visited monument in Spain, the Alhambra attracts more than two million visitors each year and they just keep coming. If your motive for visiting Granada is more about two-wheeled tourism and less about seeing monuments, free time may happen spontaneously, which makes pinning activities to a schedule more difficult. Dropping by the Alhambra to check it out is still possible; you’ll just need to bend your expectations a little. We’re not suggesting you jump the gate to get into the Nasrid Palace (which – by the way – is spectacular and worth every cent of the entry fee); instead we’ve curated a visit that doesn’t require too much advance planning. Here’s a way to “visit” the Alhambra in a less traditional style while still being able to get a sense of what’s so captivating about this rare cultural attraction.

Give your bike the day off, go by foot 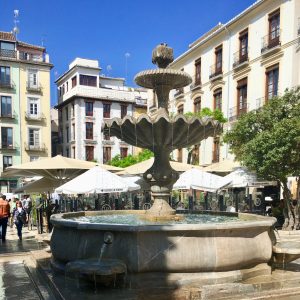 Start out from Plaza Nueva

Starting by the fountain at Plaza Nueva, head uphill via Cuesta de Gomeréz in the direction of the Alhambra. Once you pass through the Puerta de las Granadas, bear left onto the dirt footpath for a soothing stroll on the richly landscaped Alhambra grounds. Be sure to say either an audible or silent “thanks” when you pass by the statue of Washington Irving, without whose understanding of the Alhambra’s historical value in the early 19th century, we wouldn’t be enjoying its magnificence in the 21st century.

You’ll come to a small set of stairs at the end of the path, climb these and turn left to see the Puerta de la Justicia/Bab al Sharia/Portal of Justice. Turn your gaze to the top of the outer arch where you’ll see a hand engraved in the keystone. The scholarly explanation is that the hand’s five fingers represent the five pillars of Islam: the declaration of faith; praying five times each day; almsgiving; fasting during Ramadan; and making the pilgrimage to Mecca at least once in one’s life. Now find the key engraved on the keystone of the inner arch. The key symbolizes both opening and entering a sacred place.

A more folksy version explains that the two symbols are enchanted, which has enabled the Alhambra to remain standing for centuries despite the torment that often descended upon it. The legend goes on to say that once the hand reaches down and grasps the key, the Alhambra will crumble to the ground and reveal either the treasures of the Alhambra or King Boabdil’s militia, which has been spellbound since the 15th century but will be freed once the hand unlocks the spell with the key. 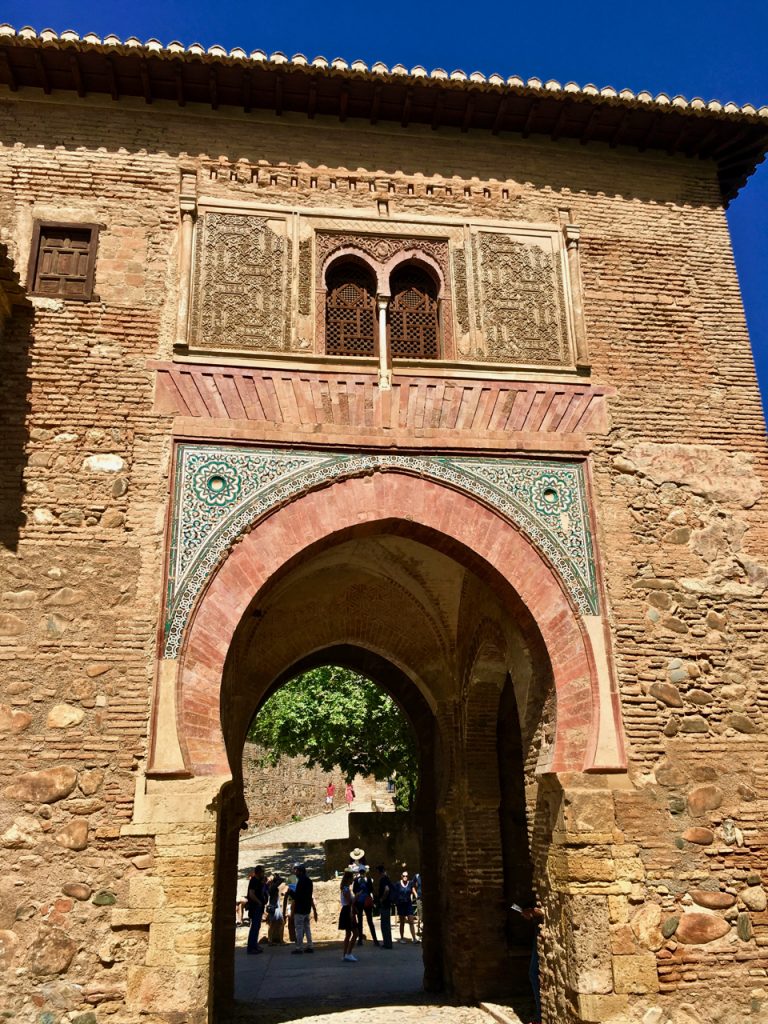 On the other side of the Puerta de la Justicia you’ll come to La Puerta del Vino (the Wine Gate), whose name may (or may not) have to do with wine. Following the ousting of the Moors in the late 15th century, tax-free wine was sold at this entrance starting in the mid 16th century, hence one theory behind the name. Another one is that the Arabic word for wine, al khamr, which closely resembles al hamra (Alhambra), plays upon a Koranic reference to the “rivers of wine” in paradise. The original name of the entrance may have been “Bab al hamra” (The Alhambra Gate), which adopted the name “Bab al khamr” perhaps to suggest that just past this arced entryway lies paradise.

As if to make a statement, Carlos V constructed this bold palace not too long after the Moors ceded the Alhambra to the Catholic monarchs in 1492. The Museo de la Alhambra (Alhambra Museum) is housed just inside the palace to the right. For a double-shot of ambience, Spotify user MuseoAlhambra has created a playlist called “Música andalusí,” which is an ethereal way to elevate your experience while you wander among the many relics of the Alhambra. There’s also a small poster, along with QR code to access the playlist, that’s hanging on the wall to the right past the turnstile.

Fake it at the Hotel Alhambra Palace 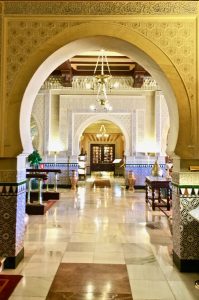 Inside the Alhambra Palace Hotel

The majestic Hotel Alhambra Palace often gets mistaken for the actual Alhambra since the hotel is perched boldly at roughly the same elevation and is painted a more vibrant shade of “hamra” (red), the color from which the palace derives its name. Upon leaving “Carlos Quinto,” turn left and walk around the palace and then down toward the paved access road. Cross the road to the dirt walkway and descend down a few steps to reach the 4-way intersection. Go straight through the intersection to start ascending the other side. Cross the road, from here you can either turn right and walk until you reach some stairs on your left that will take you to the Hotel Alhambra Palace, or you can turn left and head toward the Carmen de los Mártires gardens.

The hotel’s interior features zellige tile work similar to what you’d find inside the Nasrid palace (or any typical riad in Morocco). Lanterns, arches, urns, and Arabic calligraphy complete the façade but really, once you’re languishing on the hotel terrace with a coffee or something stronger and a 180º view of Granada, what are you missing? 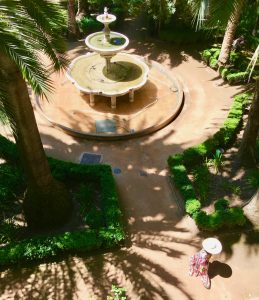 Retrace your steps back up the stairs, past the Manuel de Falla Auditorium to enter the gates of the Carmen de los Mártires, which may literally be the coolest space to wander through thanks to its canopy of shade trees, various fountains and pools of water, and especially a sitting area that’s carved into the rock on the Patio Nazri. The gardens are pretty neat for other reasons to, as a source of creative inspiration, an escape from the chaos (both external or internal), and most importantly, as a Plan B when access to the Nasrid Palace gardens and/or the Generalife is denied.

Entrance to the Carmen de los Mártires is free during opening hours, which can be found on Andalusia Tourism’s official website: http://www.andalucia.org/en/cultural-tourism/visits/granada/monuments/carmen-de-los-martires/

Here are a few other places that you can reach by bike that’ll scratch that itch for a little local culture while you’re out exploring Granada by bike.

If you are lucky enough to score tickets to the Alhambra, don’t hold back, it’s worth the visit. If however, you suddenly find yourself with the time and the curiosity to see what the Alhambra is about but all 8,500 tickets are sold out for the day, here’s a way to get the full effect without the usual effort. 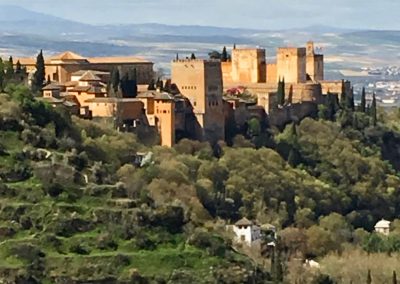 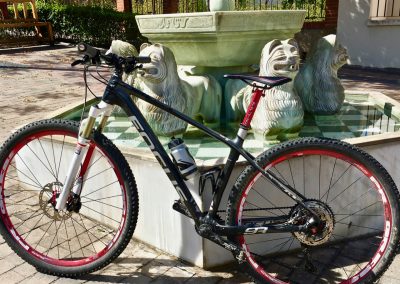 Fountain of the Lions 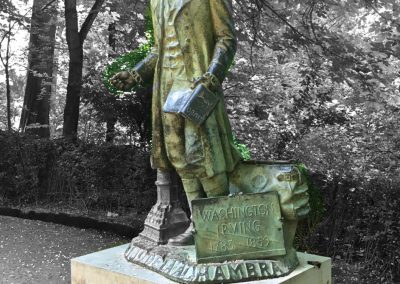 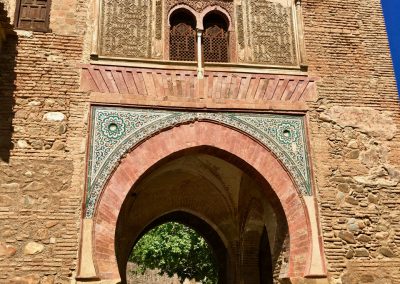 Puerta del Vino at the Alhambra 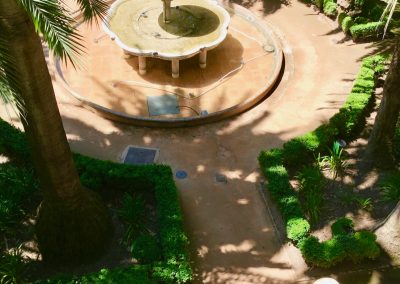 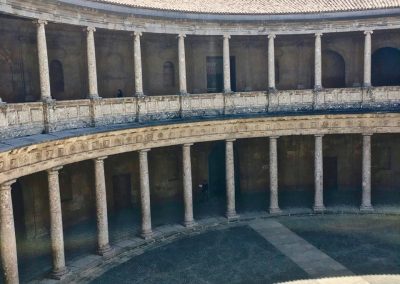 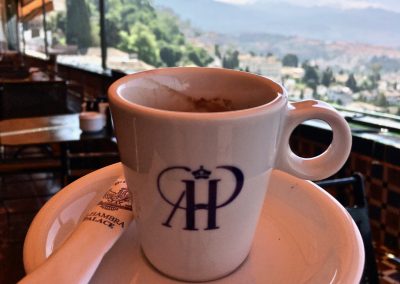 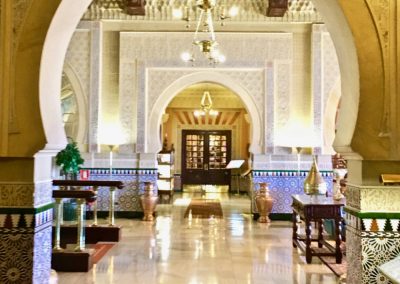