“What we found at the junction of Andalusia’s lifestyle and cycling culture was something we knew didn’t exist elsewhere in the world. As the founders of the Trails of the Alhambra, we have made it our mission to find, vet, and publish info about cycling in southern Spain that’s as iconic of Andalusia as it is worthy of you, our fellow travelers, who likewise take a risk on the unknown in search of adventure because you know it’ll always work out.”

— Wendy and Hicham, founders of the Trails of the Alhambra 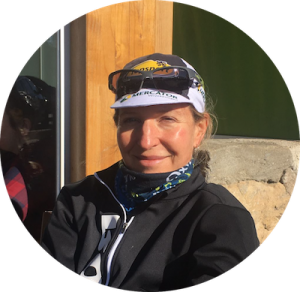 When mountain bike rentals started to gain in popularity as a recreational activity for tourists, Wendy became an early adopter of this budding business. She helped guide bike trips for summer camp kids and this job sparked a lifelong career trajectory with the bike as its main theme. As an undergrad, she crossed the United States on a loaded John Tomac signature Mongoose mountain bike and, upon arriving on campus, she loaded the bike up again to lead an orientation bike trip for new students across southern Vermont (USA).

Since then she has provided marketing and communications services to events, people, and brands both in and outside of the bike industry. She began guiding rides for tourist groups visiting Granada, Spain in the spring of 2017. As an amateur mountain bike racer, she learned what it’s like to be first, but also knows what it’s like to be last. Both of these lessons have served her well as a ride guide. 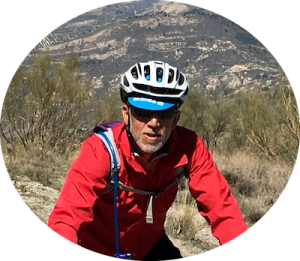 While he possesses all the credentials as a licensed coach and physical fitness educator, what really sets Hicham apart is his rare blend of formal training, creativity, and his worldview. His education took him from his native Morocco to France, then to Canada where he earned a degree in physical education from the Université du Québec à Montréal. From there he moved to Boston (USA) where he taught at both public and private institutions.

He founded the American Sport Training Center to teach people how to “train the correct way” in order to build a lasting foundation for fitness. In between teaching his clients how to build better health habits, he coaches a range of cyclists who share an objective to improve their cycling performance. Hicham’s distinct talent for getting people to challenge and take themselves seriously is offset by a coaching style distinguished by creativity and sportive play. Hicham believes that, “Life is movement. Movements are actions and the right actions not only add days to your life but life to your days.”